Q-switched lasers can effectively removing complex and multi-coloured tattoos. Multi-wavelength, Q-switched laser systems with frequency-doubled KTP can produce very short pulses of intense light that pass harmlessly through the top layers of skin to be selectively absorbed by treatment-specific pigments.

Tattoo removal requires powerful, multi-wavelength solutions for the most effective results. The best available laser systems are the highly versatile StarWalker® devices. Both systems have a high-powered, Q-switched, multiple wavelength Nd:YAG laser at their core.

Fotona StarWalker® MaQX: A nanosecond laser with a difference as it has ultrashort pulse peak powers of traditional picosecond lasers within its nanosecond pulse

StarWalker® PQX: A picosecond laser which has even shorter wavelength than the nanolasers, consisting of a high energy train of ultra-short bursts of energy in trillionths of a second.

In addition, both systems possess four complementary wavelengths and 14 laser modalities. The StarWalker® range functions as a highly versatile, multipurpose system that performs a wide range of applications in aesthetics

Laser technology inside the StarWalker® system 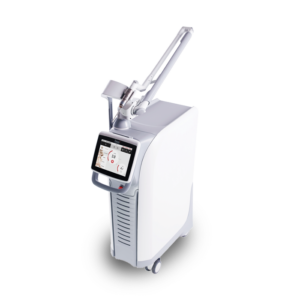 Join our Laser Academy training or attend one of our events to ensure you are providing the very latest in laser techniques and treatments for your clients.

Key benefits to you and your customers

Third-generation ASP technology for ultimate precision and safety of treatments

With the latest and most advanced technology, the Fotona Q-switched lasers work to effectively remove even the most complex and multi-coloured tattoos

14 laser modalities for the ablation of keratoses, moles and other pigmented lesions, enabling the removal of the epidermis and superficial dermis in a controlled manner

A highly effective treatment that works by targeting Nd:YAG laser energy to the interior of a vein, causing the vein wall to shrink and seal shut

If you are looking to transform your clinic with one of our lasers,
contact one of our team members, who would be happy to help answer any questions.

BOOK AN APPOINTMENT
This site uses cookies: Find out more.
Go to Top